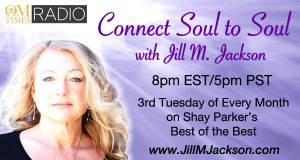 As a previously featured guest host on Shay Parker’s “Best of the Best”, Jill interviewed special guests including Spiritual Authors & Teachers, Astrologers, Energy Healers, and some of the most gifted Psychics and Mediums in the world today.

Due to Jill’s busy schedule of writing, Spiritual Teaching, and traveling for special events, she is no longer hosting her monthly radio show.

Miss a show? Don’t worry – we’ve got you covered! See below, or tune in to the OM Times Radio Network for archived shows!